On new years day I went to the Gokoku shrine based by Hiroshima castle.

As people were tired and hangover I decided to adventure over there by myself. When I got there I saw a queue, as I love queues so much I decided to join it. I hoped that it wasn’t for one of the many little food or toy stalls along the way.

After being used as a landmark/ crossing point for the people there. I found myself in the middle of a massive crowd inside the Shrine. Still queuing I watched in front of me as the crowd ahead walked up some stairs and stopped in front of what looked to be a very large stall. I panicked I don’t know much Japanese, and I was stuck in this large crowd of people besides I had queued for about 15 mins running now would just look weird.

When I got up the stairs I looked, it wasn’t a stall at all it was the shrine where you give your donations and say your prayers. Still panicked because I didn’t know what to do I don’t really want to look like the stupid foreign person.

So I copied everyone else:

Step 1 get to the front.

Step 2 throw donation into shrine. I picked the 5 yen because it’s supposed to be lucky because of it’s hole.

Then I realised I didn’t have my camera.

I looked around the stalls in the shrine. You could give a donation to tie a good luck piece of paper to the wood, didn’t understand those so I left it to the Japanese to get there good luck for this year.

But I did get something: 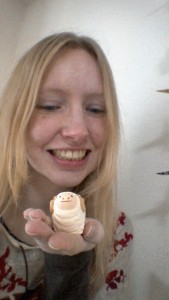 Here’s a picture of me and a sheep, because it is the year of the sheep.

Where have you been?